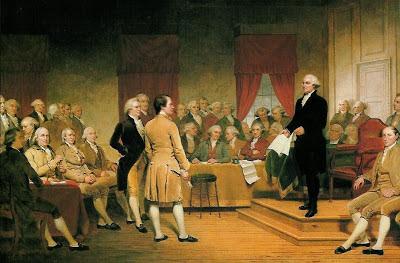 “[The Federalist Papers] have thrown new light upon the science of government; they have given the rights of man a full and fair discussion, and explained them in so clear and forcible a manner as cannot fail to make a lasting impression.” --George Washington

“[The Federalist Papers] will merit the Notice of Posterity; because in it are candidly and ably discussed the principles of freedom and the topics of government, which will be always interesting to mankind so long as they shall be connected in Civil Society.” --George Washington
“[The Federalist Papers are] the best commentary on the principles of government which ever was written.”  --Thomas Jefferson

“For all posterity the "Federalist" must remain the most authoritative commentary upon the Constitution that can be found; for it is the joint work of the principal author of that Constitution and of its most brilliant advocate.” --John Fiske (American author and historian)
“These essays have been appraised as 'the greatest treatise on government that has ever been written,' and its writers have been ranked as of the same order with Aristotle, Montesquieu, and Locke." –J. Reuben Clark, Jr. (Solicitor and Undersecretary of the U.S. State Department, U.S. Ambassador to Mexico).
“The Federalist letters are among the classics of American literature. Their practical wisdom stands pre-eminent amid the stream of controversial writing at the time.” --Winston Churchill
“[The Federalist Papers are] the most important work of political science ever written in the United States.” --Clinton Rossiter (Professor and historian, Cornell University)
“The Ideas of The Federalist should be essential elements of civic education, because they are core values and principles of the American heritage and foundations of national unity in a pluralistic society.” --John J. Patrick (Professor and author, Indiana University)

“It would be difficult to overstate the significance of The Federalist for understanding the principles of American government and the challenges that liberal democracies confront early in the second decade of the 21st century.” --Peter Berkowitz (senior fellow at Stanford University's Hoover Institution)
“We must learn the principles of the Constitution in the tradition of the Founding Fathers.  Have we read the Federalist papers?” --Ezra Taft Benson (former Secretary of Agriculture under President Dwight D. Eisenhower)

If you have not read the Federalist Papers, you simply cannot fully understand the Constitution, its principles and purposes. Available free online at the Library of Congress (among other sites): http://thomas.loc.gov/home/histdox/fedpapers.html or order in paperback from Amazon.com: https://smile.amazon.com/Federalist-Papers-Signet-Classics/dp/0451528816/  I invite you to start today...