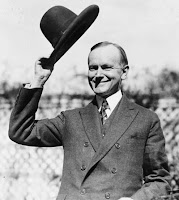 "We live in an age of science and of abounding accumulation of material things. The things of the spirit come first. Unless we cling to that, all our material prosperity, overwhelming though it may appear, will turn to a barren sceptre in our grasp... Man has a spiritual nature. Touch it, and it must respond as the magnet responds to the pole."

"I want the people of America to be able to work less for the government and more for themselves. I want them to have the rewards of their own industry. This is the chief meaning of freedom. Until we can reestablish a condition under which the earnings of the people can be kept by the people, we are bound to suffer a very severe and distinct curtailment of our liberty."

"It would be exceedingly difficult to overestimate the important part that teachers take in the development of the life of the nation. They exercise their art, not on the materials of this world which pass away, but upon the human soul, where it will remain through all eternity."

"Real reform does not begin with a law, it ends with a law. The attempt to dragoon the body when the need is to convince the soul will end only in revolt... It is time to supplement the appeal to law, which is limited, with an appeal to the spirit of the people, which is unlimited."

"The wise and correct course to follow in taxation is not to destroy those who have already secured success but to create conditions under which every one will have a better chance to be more successful."

"The fundamental characteristics of humanity are not going to be changed by substituting government action for private enterprise. The individual who manages the one, with all his imperfections and his selfishness, will have to be employed to manage the other."

"If the Government gets into business on any large scale, we soon find that the beneficiaries attempt to play a large part in the control. While in theory it is to serve the public, in practice it will be very largely serving private interests. It comes to be regarded as a species of government favor and those who are the most adroit get the larger part of it."

"Under a system of popular government there will always be those who will seek for political preferment by clamoring for reform. While there is very little of this which is not sincere, there is a large portion that is not well informed. In my opinion very little of just criticism can attach to the theories and principles of our institutions. There is far more danger of harm than there is hope of good in any radical changes. We do need a better understanding and comprehension of them and a better knowledge of the foundations of government in general. Our forefathers came to certain conclusions and decided upon certain courses of action which have been a great blessing to the world. Before we can understand their conclusions we must go back and review the course which they followed. We must think the thoughts which they thought."

“If in a free republic a great government is the product of a great people, they will look to themselves rather than government for success. The destiny, the greatness of America lies around the hearthstone. If thrift and industry are taught there, and the example of self-sacrifice oft appears, if honor abide there, and high ideals, if there the building of fortune be subordinate to the building of character, America will live in security, rejoicing in an abundant prosperity and good government at home in peace, respect, and confidence abroad. If these virtues are absent, there is no power that can supply these blessings. Look well to the hearthstone, therein all hope for America lies.”