Calvin Coolidge: The Inspiration of the Declaration 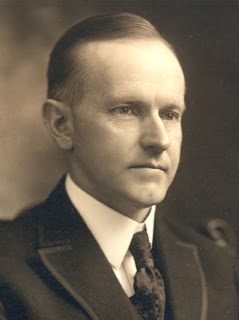 Our 30th President, Calvin Coolidge spoke in Philadelphia on the 150th anniversary of the Declaration of Independence.  Here is a brief excerpt from his speech:


"Under a system of popular government there will always be those who will seek for political preferment by clamoring for reform. While there is very little of this which is not sincere, there is a large portion that is not well informed. In my opinion very little of just criticism can attach to the theories and principles of our institutions. There is far more danger of harm than there is hope of good in any radical changes. We do need a better understanding and comprehension of them and a better knowledge of the foundations of government in general. Our forefathers came to certain conclusions and decided upon certain courses of action which have been a great blessing to the world. Before we can understand their conclusions we must go back and review the course which they followed. We must think the thoughts which they thought. Their intellectual life centered around the meeting-house. They were intent upon religious worship. While there were always among them men of deep learning, and later those who had comparatively large possessions, the mind of the people was not so much engrossed in how much they knew, or how much they had, as in how they were going to live. While scantily provided with other literature, there was a wide acquaintance with the Scriptures. Over a period as great as that which measures the existence of our independence they were subject to this discipline not only in their religious life and educational training, but also in their political thought. They were a people who came under the influence of a great spiritual development and acquired a great moral power.
No other theory is adequate to explain or comprehend the Declaration of Independence. It is the product of the spiritual insight of the people. We live in an age of science and of abounding accumulation of material things. These did not create our Declaration. Our Declaration created them. The things of the spirit come first. Unless we cling to that, all our material prosperity, overwhelming though it may appear, will turn to a barren sceptre in our grasp. If we are to maintain the great heritage which has been bequeathed to us, we must be like-minded as the fathers who created it. We must not sink into a pagan materialism. We must cultivate the reverence which they had for the things that are holy. We must follow the spiritual and moral leadership which they showed. We must keep replenished, that they may glow with a more compelling flame, the altar fires before which they worshiped."
Posted by J. David Gowdy at 11:12 PM