The Wisdom of John Adams 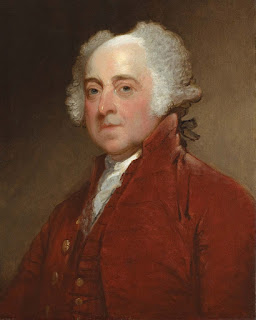 “I am surprised at the suddenness as well as the greatness of this revolution... It is the will of Heaven that the two countries should be sundered forever. It may be the will of Heaven that America shall suffer calamities still more wasting, and distresses yet more dreadful. If this is to be the case it will have this good effect at least. It will inspire us with many virtues which we have not, and correct many errors, follies, and vices which threaten to disturb, dishonor, and destroy us. The furnace of affliction produces refinement in states as well as individuals.”

“The second day of July, 1776, will be the most memorable epocha in the history of America. I am apt to believe that it will be celebrated by succeeding generations as the great anniversary festival. It ought to be commemorated as the day of deliverance, by solemn acts of devotion to God Almighty. It ought to be solemnized with pomp and parade, with shows, games, sports, guns, bells, bonfires, and illuminations, from one end of this continent to the other, from this time forward forevermore.”

“The happiness of society is the end of government.”

“They define a republic to be a government of laws, and not of men.”

“But a Constitution of Government once changed from Freedom, can never be restored. Liberty, once lost, is lost forever.”

“Our obligations to our country never cease but with our lives.”

“I pray Heaven to bestow the best of blessings on this house and all that shall hereafter inhabit it. May none but honest and wise men ever rule under this roof [the White House].”

“Because power corrupts, society's demands for moral authority and character increase as the importance of the position increases.”

“Power always thinks it has a great soul and vast views beyond the comprehension of the weak.”

“Nip the shoots of arbitrary power in the bud, is the only maxim which can ever preserve the liberties of any people.”

“Facts are stubborn things; and whatever may be our wishes, our inclinations, or the dictates of our passions, they cannot alter the state of facts and evidence.”

“Liberty cannot be preserved without general knowledge among the people.”

“Let us tenderly and kindly cherish, therefore, the means of knowledge. Let us dare to read, think, speak, and write.”

“Children should be educated and instructed in the principles of freedom.”

“You will never be alone with a poet in your pocket.”

“Without religion this world would be something not fit to be mentioned in polite company, I mean Hell.”

“The substance and essence of Christianity, as I understand it, is eternal and unchangeable, and will bear examination forever, but it has been mixed with extraneous ingredients, which I think will not bear examination, and they ought to be separated.”

“The Ten Commandments and the Sermon on the Mount contain my Religion.”

“We have no government armed with power capable of contending with human passions unbridled by morality and religion. Avarice, ambition, revenge, or gallantry would break the strongest cords of our constitution as a whale goes through a net. Our Constitution was made only for a moral and religious people. It is wholly inadequate to the government of any other.”