The Statesmanship of George Washington 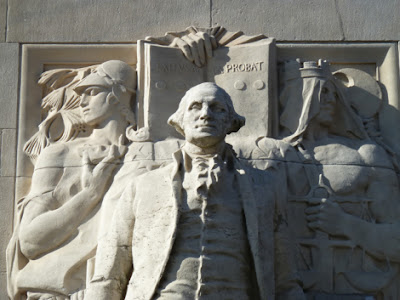 The Merriam Webster dictionary defines a “statesman” as one who is versed in the principles or art of government; and a wise, skillful, and respected political leader.  Washington was all of this, and more. While not as well-educated as Jefferson or Madison, Washington (who did not attend college), in addition to a being an ardent student of farming, was a devoted reader and student of Western political philosophy and history.  At the time of his death, his library consisted of over 900 volumes, which in addition to agricultural books, included such classics as Plato’s Republic, Aristotle’s Politics, Plutarch’s Lives, and Locke’s Two Treatises on Government. One of his favorite books, however, was not a treatise on agriculture but a play titled Cato by Addison. Washington loved the theatre, and like many other new Americans, appreciated the relevance of the play’s depiction of the Roman statesman Cato’s struggle between virtue and tyranny.  Of course, he read newspapers and the pamphlets of the Revolution, such as Thomas Paine’s Common Sense, of which he ordered copies for all of his troops. And, during the debate over the Constitution, he read the Federalist Papers, as well as many other essays.

He also surrounded himself with, and listened to counsel from, the great thinkers of the Revolution: Thomas Jefferson, his first Secretary of State, Alexander Hamilton, his Secretary of the Treasury, and John Adams, the first Vice President.  Like President Lincoln’s cabinet, these men proved to be Washington’s “Team of Rivals.”  Washington also considered James Madison a trusted political confidant and corresponded with him often.  When Washington contemplated his retirement from public office (after his first term as President), he relied on Madison to draft his farewell address.[1]

Washington’s education in the principles of self-government were deeply rooted in religion and in his reading of the Bible.  As a prominent historian has stated, “Throughout his public life Washington successfully balanced public religion with religious liberty… [he] invoked the language of the Bible in private and in public his whole life.  It had a strong influence on Washington’s mind, and morals, and speech… [and] as a statesman.”[2]

Washington was especially fond of agrarian biblical metaphors such as “wheat and tares,” turning “swords into ploughshares,” and sitting in peace under a “vine and fig tree.” …Washington adapted those prophetic lines on several occasions as president. In a 1791 letter to Catherine Macaulay Graham, he combined the allusion from Micah with the New Testament verses Matthew 24:6 and Mark 13:7, predicting “wars and rumors of wars.” The “United States enjoys a scene of prosperity and tranquillity under the new government,” he told her, “that could hardly have been hoped for under the old . . . while you, in Europe, are troubled with war and rumors of war, every one here may sit under his own vine and none to molest or make him afraid.”[3] …Upon accepting his commission as commander of the Continental Army, Washington combined classical and biblical elements in his speech to Congress. Washington declared that “I have no lust after power but wish with as much fervency as any Man upon this wide extended Continent, for an opportunity of turning the Sword into a plow share.”[4]

We can see evidence of Washington’s statesmanship at two critical junctures of the American Revolution.  He understood the important difference between civil and military power and always acknowledged and respected from whence his authority came, and who he ultimately served, the people and their representatives.  When his troops were destitute of food, clothing and supplies during the bitterly cold winters at Valley Forge and again at Morristown, General Washington constantly appealed to Congress. He requested, cajoled, and complained, but he never used threats or compulsion.[5]  As French Major General wrote of Washington in 1782, “This is the seventh year that he has commanded the army and he has obeyed Congress: more need not be said.”[6]

Then again, in 1783, after the Revolutionary War was finally over and the peace treaty was being negotiated in Paris with Great Britain, disgruntled Officers of the Continental Army privately met in Newburgh, New York on March 15th, to discuss their grievances and to consider a possible revolt, or military coup, against Congress. They were angry over the failure of Congress to honor its promises to the army regarding salary and pensions. The officers had heard that the American government was going broke and that they might not be compensated at all. Unexpectedly, Washington showed up at their unauthorized meeting.  He was not entirely welcomed by his men, but nevertheless, spoke to them … He pledged to help them obtain amends for their grievances. He encouraged them to “patriotism and patient virtue, rising superior to the pressure of the most complicated sufferings.”

However sincere, his remarks were not very well received by his men. The question of a military overthrow of Congress still hung in the balance.  If Washington decided to join his men, he could march on Philadelphia and become King of America (and such was the history of leaders such as Alexander the Great and Caesar Augustus).  After a long silence, Washington took out a letter from a Congressman explaining the financial difficulties of the government. After reading a portion of the letter with his eyes squinting at the small writing, Washington suddenly stopped. … His officers stared at him, wondering… Washington then reached into his coat pocket and took out a pair of reading glasses. Few of them even knew that he wore glasses, and were surprised.

"Gentlemen," said Washington, "you will permit me to put on my spectacles, for I have not only grown gray but almost blind in the service of my country." In that moment, Washington's men were deeply moved, even shamed, and many were quickly brought to tears, now looking with great affection at this aging man who had led them through so much. Washington read the remainder of the letter, then left without saying another word. … After a long silence, his officers voted unanimously to submit to the rule of Congress, thus preserving the rule of law in the fledgling Republic.

On April 30, 1789, standing on the balcony of Federal Hall on Wall Street in New York, Washington took his oath of office as the first President of the United States. ‘As the first of every thing, in our situation will serve to establish a Precedent,” he wrote James Madison, “it is devoutly wished on my part, that these precedents may be fixed on true principles.”[7]  As our nation’s first Chief Executive, Presidential historian Stephen F. Knott, has noted that, “Washington shaped many  …aspects of the presidency that we take for granted today. He created the president’s cabinet (and what a cabinet it was); he fulfilled his constitutional obligation to “take care that the laws be faithfully executed” …he established (in concert with James Madison) the precedent that the president alone possessed the power to remove executive branch appointees; and perhaps most importantly, he left a legacy of respect for the new office through his deft blend of accessibility and detachment – Washington’s frequent presidential tours of the nation allowed the people to see their president, although always at a distance. This was not a glad handing president who pandered to the people and tried to win their affection by presenting himself as a “regular guy.” Washington believed that the people wanted to look up to their president, and that a certain amount of awe toward the office, even in a republic, was an attribute that contributed to a respectable government.”[8]

A final observation on Washington’s statesmanship to consider was made by the secretary of a British Diplomat who said that Washington “[possessed] the two great requisites of a statesman, the faculty of concealing his own sentiments and of discovering those of other men.”[9] As John Adams recalled years later, “He possessed the gift of silence.”[10]  And, when it came time for him to step down as leader of the only free nation in the world, he did so humbly, returning “to the plow” at his beloved farm at Mount Vernon.

The day after she heard of Washington’s death, Abigail Adams wrote to her sister:

“No man ever lived, more deservedly beloved and respected. The praise and I may say adulation which followed his administration for several years, never made him forget that he was a man, subject to the weakness and frailty attached to human nature. He never grew giddy, but ever maintained a modest diffidence of his own talents, and if that was an error, it was of the amiable and engaging kind. . . . Possessed of power, possessed of an extensive influence, he never used it but for the benefit of his Country. Witness his retirement to private life when Peace closed the scenes of War; when called by the unanimous suffrages of the People to the chief Majestracy of the Nation, he acquitted himself to the satisfaction and applause of all good men. When assailed by faction, when reviled by party, he suffered with dignity, and retired from his exalted station with a character which malice would not wound, nor envy tarnish. If we look through the whole tenor of his life, history will not produce to us a parallel.”[11]

Excerpt from "The Character and Statesmanship of George Washington" by J. David Gowdy


Image is of "Washington at Peace" (A. Stirling Calder) with figures at his side representing Wisdom and Justice, on the Washington Arch in Greenwich Village, New York (https://walkaboutny.com/2014/02/22/a-birthday-tribute-to-george-washington/)
Posted by J. David Gowdy at 12:28 PM