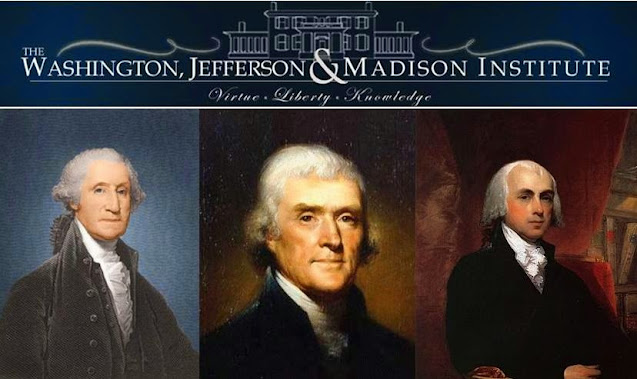 The maxims of the Washington, Jefferson & Madison Institute are “Virtue, Liberty, Knowledge” – three ideals that are deeply embedded in the American Founding and in the lives and writings of the three Virginia Founders and Presidents that we have chosen to represent the name of our Institute.

George Washington.  No one in the American Founding represents the ideal of virtue as much as the Indispensable Man, George Washington.  Washington embodied the idea of private and public virtue throughout his life.  He mastered himself to become the virtuous general, statesman, and first President of the United States.  He continually and unselfishly answered the call of his country, served the republic without pay, and retired to the comfort of Mount Vernon instead of seizing power.  At the end of the Revolutionary War, he returned his commission to the Congress and did not become a Caesar.  After establishing the precedent of two terms and rotation in office, Washington resigned from the presidency and did not become a king.

Washington (and all of the Founders) also spoke often about virtue.  They believed that self-mastery was necessary for a self-governing people to enjoy the fruits of liberty and that those who governed the republic must also be virtuous.  He stated, “The aggregate happiness of society, which is best promoted by the practice of a virtuous policy, is, or ought to be, the end of all government.”[i]  Washington’s First Inaugural Address focused a great deal on virtue: “The foundation of our national policy will be laid in the pure and immutable principles of private morality . . . . There exists in the economy and course of nature an indissoluble union between virtue and happiness; between duty and advantage; between the genuine maxims of an honest and magnanimous policy and the solid rewards of public prosperity and felicity.”[ii] Washington was, and always should be, "First in war, first in peace, first in the hearts of his countrymen"[iii]

Thomas Jefferson.  In our minds, the Founding Father who best represents the idea of liberty is the author of the Declaration of Independence, the Virginia Statute for Religious Freedom, the father of the University of Virginia, and the third President.  These great documents and institutions of liberty were emblematic of Jefferson’s defense of the human yearning for individual liberty and for freedom from government control of one’s political or religious opinions, and the individual right to pursue happiness how one chooses.  Jefferson was an Enlightenment thinker who had great optimism in progress rooted in human liberty.  As he wrote shortly before his death, “All eyes are opened, or opening, to the rights of man. The general spread of the light of science has already laid open to every view the palpable truth, that the mass of mankind has not been born with saddles on their backs, nor a favored few booted and spurred, ready to ride them legitimately, by the grace of God.”[iv]

Jefferson, along with the other Founding Fathers, however, believed in liberty under law.   Liberty would be guided by virtue, or it would become license, which would ruin the individual soul as well as the republic.  As Jefferson wrote, “Liberty…is the great parent of science & of virtue: and that a nation will be great in both, always in proportion as it is free.”[v]  Jefferson should always be remembered as the great advocate of human equality and liberty.

James Madison.  This Virginian completing the triumvirate of Founders was the Father of the Constitution, the main architect of the Bill of Rights, and the fourth President.  The force of Madison’s statesmanship, lawgiving, and rhetoric was based upon his deep study in ancient and modern history and philosophy.  From his studies under Rev. John Witherspoon at Princeton University, his study of ancient and modern confederacies before the Constitutional Convention, his reading in political philosophy for his major contributions to the Federalist Papers, and his leadership with Jefferson creating the University of Virginia for educating future statesmen and citizens, Madison knew that knowledge was the basis of republican constitution-making and citizenship.

Madison believed that the citizenry in a Republic must be educated in the principles of liberty and watchful of their government to prevent tyranny.  He wrote, “Knowledge will forever govern ignorance; and a people who mean to be their own governors must arm themselves with the power which knowledge gives.”[vi] Madison should always be remembered as the chief architect of our individual rights, privileges, and liberties under the Constitution.

Studying the lives and writings of these three Founders – Washington, Jefferson & Madison – and those three founding ideals – “Liberty, Virtue, and Knowledge” – form the basis of the WJMI charter, “To Perpetuate the Study of the Teachings and Examples of the Founders of the Republic” and of our mission, which is, "To instill within educators and students of the rising generation, a greater understanding of, and appreciation for, the Founding Fathers and the Founding Documents of the United States of America." We invite you to join us in this great cause.