The Virginia Declaration of Rights 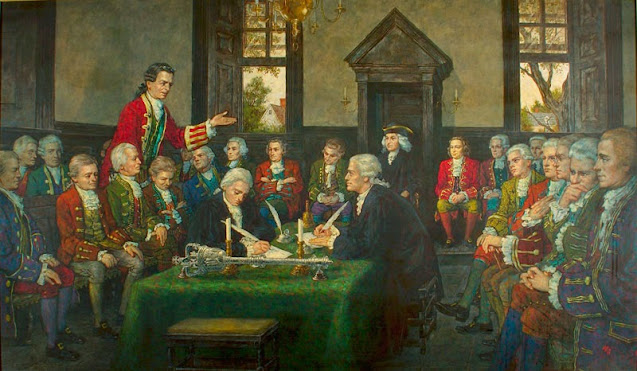 In early May, 1776, Congressman John Adams co-sponsored a resolution calling of the colonies to “adopt such government as shall, in the opinion of the representatives of the people, best conduce to the happiness and safety of their constituents in particular and America in general.”

On May 15, Congress adopted the resolution with a preamble Adams wrote that asserted that the people in their colonies were sovereign and governed themselves by their own consent.  The preamble virtually amounted to a declaration of independence from Great Britain.  The preamble read:

It is necessary that the exercise of every kind of authority under the said Crown should be totally suppressed, and all the powers of government exerted under the authority of the people of the colonies, for the preservation of internal peace, virtue, and good order as well as for the defense of their lives, liberties and properties, against the hostile invasions and cruel depredations of their enemies.

On that same day, the delegates to the Fifth Virginia Convention (the governing body of the colony) assembled in Williamsburg and instructed its delegates in Philadelphia to “propose to that respectable body to declare the United Colonies free and independent states, absolved from all allegiance to, or dependence upon, the crown or parliament of Great Britain.”  The Convention then drafted a declaration of rights and a constitution based upon Congress’ resolution.  Patrick Henry, James Madison, and George Mason were among the notables appointed to the committee to draft the declaration of rights.

The resulting Virginia declaration of rights was one of the most significant expressions of American Founding principles.  Its Lockean principles of self-government would shape Thomas Jefferson’s Declaration of Independence in Philadelphia a month later and the American Constitution and Bill of Rights over a decade later.

When it was adopted on June 12, 1776, the declaration averred the universal principle that all humans have certain fundamental rights by nature that government cannot violate.  The slaveholders of Virginia recognized the import of these universal principles for slavery and added the section about not being divested of those rights “when they enter into a state of society.”   The declaration read, in language that would influence the Declaration of Independence:

That all men are by nature equally free and independent, and have certain inherent rights, of which, when they enter into a state of society, they cannot, by any compact, deprive or divest their posterity; namely, the enjoyment of life and liberty, with the means of acquiring and possessing property, and pursuing and obtaining happiness and safety.

The declaration supported the Lockean idea of a social compact that the sovereign people formed a representative government with the purpose of protecting their rights.  It stated, “That all power is vested in, and consequently derived from, the people; that magistrates are their trustees and servants.”

The declaration upheld the principle that the same people had a right to rebel against tyrannical government that violated their rights and form a new government.  In language that strongly shaped the Declaration of Independence, the Virginia declaration stated: “Whenever any government shall be found inadequate or contrary to these purposes, a majority of the community hath an indubitable, unalienable, and indefeasible right to reform, alter or abolish it, in such manner as shall be judged most conducive to the public weal.”

The declaration included several principles of a constitutional republic that would undergird the American system of self-government.  For example, it contained a the ban on “descendible” or “hereditary” privileges and offices.  The declaration also asserted that, “the legislative and executive powers of the state should be separate and distinct from the judicative,” supporting the ideas of Montesquieu for a separation of powers that would influence James Madison at the Constitutional Convention.  An important characteristic of government by consent was to have “frequent, certain, and regular elections” which were fixed and free.

The declaration also placed stringent limits on the power of government and reserved those powers to the consent of the people.  The people could not taxed without their consent, the government could not suspend laws without the consent of the people, and the accused had many rights that the lawful government was bound to respect – know the cause of an accusation, confront witnesses, enjoy a fair and speedy trial by his peers, not incriminate himself, not lose his fundamental rights without due process, or be arrested without a warrant.  These formed the basis of the Fourth, Fifth, and Sixth Amendments in the Bill of Rights.

Additional protections in Virginia that would eventually influence the Bill of Rights were no excessive bail, no excessive fines, and no cruel and unusual punishments.  In a strong statement of the importance of the connection between a free press and republican liberty, the declaration stated: “That the freedom of the press is one of the greatest bulwarks of liberty and can never be restrained but by despotic governments.”

Besides a clause for an armed people forming a militia for the “safe defense of a free state,” the declaration affirmed its opposition to “standing armies, in time of people . . . avoided as dangerous to liberty” and a military that was “under strict subordination to, and be governed by, the civil power.”  Thus, it helped shape the Second Amendment and asserted principles that General George Washington would embody in his actions resigning at the end of the Revolutionary War.

As in several other statements before and during the Revolutionary War, the Virginians proclaimed that republican self-government was rooted upon the virtue of the people and natural law.  “That no free government, or the blessings of liberty, can be preserved to any people but by a firm adherence to justice, moderation, temperance, frugality, and virtue and by frequent recurrence to fundamental principles.”

Although George Mason sought to include the revolutionary and Lockean idea of religious tolerance into the document, Madison amended the statement to be a broad statement of religious liberty of conscience as a fundamental natural right.  The declaration stated:

That religion, or the duty which we owe to our Creator and the manner of discharging it, can be directed by reason and conviction, not by force or violence; and therefore, all men are equally entitled to the free exercise of religion, according to the dictates of conscience; and that it is the mutual duty of all to practice Christian forbearance, love, and charity towards each other.

The Virginia Declaration of Rights is studied every year by schoolchildren in Virginia, but it should be studied by students and citizens everywhere as one of the core documents of American liberty and Founding principles standing alone and as a document that laid the foundation for our other most important Founding documents.
_________________________________________
Tony Williams is the Program Director of the WJMI and the author of America’s Beginnings: The Dramatic Events that Shaped a Nation’s Character.