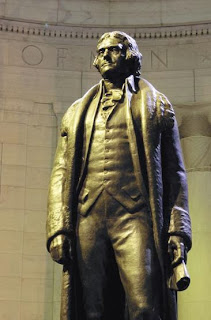 Jefferson believed in the equality of all humans with respect to their rights.  Setting aside the thorny question of the contradiction for several groups such as women, slaves, and Indians who were not actually enjoying all of those rights in 1776, Jefferson worked assiduously to destroy the inequalities that he believed plagued Virginia, Europe, and most of the world.  Clearly, the Declaration of Independence is his clearest statement of this belief in equality of all people in the natural rights of mankind.

A key corollary to equality for Jefferson was that of human freedom.  Like many French Enlightenment philosophes, Jefferson believed that individual perfectibility and social progress could only be achieved by liberating mankind from the shackles of tyranny in monarchy, in feudalism and aristocracy, and in religious traditions which burdened mankind with inequalities and ignorance.  When these institutions were destroyed, a new age of liberty and the rights of mankind would dawn.

Evidence for this strain in Jefferson’s thought was seen in the 1770s and 1780s when he served on the committee to revise the legal code of Virginia and sought to tear down the vestiges of artificial privilege in the commonwealth.  He fought against primogeniture and entail to promote equality of property and opportunity as opposed to artificial and inherited aristocracy.  During this struggle, he wrote that the old laws that determined how land would be distributed worked for the benefit of the gentry and corrupted equality and republican virtue: “The transmission of this property from generation to generation . . . raised up a distinct set of families, who, being privileged by law in the perpetuation of their wealth, were thus formed into a Patrician order, distinguished by the splendor and luxury of their establishments.”  By revising the laws, Jefferson worked to “annul this privilege, and instead of an aristocracy of wealth . . . to make an opening for the aristocracy of virtue and talent, which nature has wisely provided for the direction of the interests of society, and scattered with equal hand through all its conditions, was deemed essential to a well-ordered republic.”

In his failed 1778 “Bill for the More General Diffusion of Knowledge,” Jefferson wanted to use a rudimentary universal education for all boys and girls to further his goals of a natural aristocracy of talent and virtue and equality in society opposed to inherited inequality.   He also thought that the purpose of education in a republic was to enlighten the minds and cultivate the virtue of the people, to guard their natural rights, and to promote equality.  “It becomes expedient for promoting the publick happiness that those persons, whom nature hath endowed with genius and virtue, should be rendered by liberal education worthy to receive, and able to guard the sacred deposit of the rights and liberties of their fellow citizens, and that they should be called to that charge without regard to wealth, birth, or other accidental condition.”

Jefferson saw his “Virginia Statute for Religious Freedom,” which was ably pushed through the VA Assembly for his friend, James Madison, as a victory for a free mind and the natural right of religious opinion against the spiritual tyranny of an established church in Virginia.  “All men shall be free to profess, and by argument to maintain, their opinions in matters of religion, and that the same shall in no wise diminish, enlarge, or affect their civil capacities,” the new law declared.

In the late 1780s and 1790s, amidst the swirling chaos of events in Revolutionary France and the tensions in the new American nation, Jefferson’s thought became distinctly more radical.  He witnessed the extreme inequalities and privileges of monarchical, aristocratic France and conversed with many of its most important philosophes about radical Enlightenment political ideas.  The resulting radicalism is evident in statements such as, “I hold that a little rebellion now and then is a good thing,” or, “The tree of liberty must be refreshed from time to time with the blood of patriots & tyrants.  It is its natural manure.”

Perhaps most radical was a letter Jefferson wrote to his friend James Madison in the months after the storming of the Bastille and the outbreak of the French Revolution which focused on the ideas that the “earth belongs to the living.”  Jefferson first posed the question of whether one generation may legally bind a future generation, and proposed the idea that property rights, obligation of debts, and even laws and constitutions were not perpetual and were confined to a single generation.  These radical ideas left his poor friend aghast at the breakdown in the social and political order should his friend’s ideas come to fruition and caused Madison to write a stern rebuttal in defense of natural law property rights and contractual obligations.

What accounts for the shocking radicalism of his sentiments?  His more reasonable early work in legal reform in Virginia advanced republican equality and liberty over inherited privilege of wealth and status.  But, the inequality he saw in France and the radical answers supplied by the French Enlightenment philosophers profoundly shaped Jefferson’s thinking while abroad as minister to France.

As historian Merrill D. Peterson wrote in his definitive biography, Thomas Jefferson and the New Nation, the idea that property, debt, and laws did not survive more than a generation “could not have matured in America.  It grew out of the European situation, specifically the situation in France in 1789.  It expressed the speculative fervor of the French Revolution, the rage against the past, the assault on inequalities that amounted to a tyranny of the dead over the living.”[i]  And, Jefferson would bring these ideas back to America as he advocated for the French Revolution as Secretary of State and fought the specter of monarchism and ostensible privilege under the Hamiltonian system.

Jefferson never shed his belief in human equality.  Shortly before his death in 1826, Jefferson penned a letter reflecting on the cause of liberty and the fate of mankind in which he asserts that: “All eyes are opened, or opening, to the rights of man.  The general spread of the light of science has already laid open to every view the palpable truth, that the mass of mankind has not been born with saddles on their backs, nor a favored few booted and spurred, ready to ride them legitimately, by the grace of God.”

After his death on the fiftieth anniversary of the Declaration of Independence, it would be left to “the living” to bring this vision to fruition and continue his work for human equality by struggling for the end of slavery, winning universal male suffrage, and gaining women’s suffrage among other fundamental reforms.

Tony Williams is the Program Director for the Washington, Jefferson & Madison Institute and the author of America’s Beginnings: The Dramatic Events that Shaped a Nation’s Character and a collection of primary sources for the WJMI Thomas Jefferson roundtable discussion.