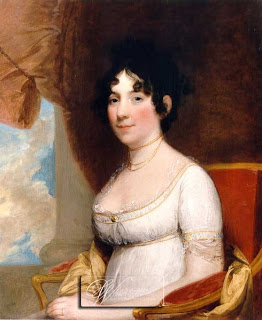 Dolley’s generosity and openness were the key to her charm, and “a large measure of her social success lay in her willingness to supply members of the federal government with access not only to herself and her husband, but also to one another. Then, as now, “access” to key personnel and points of decision was a crucial factor in the political process, and one most available in an informal situation rather than in a formal structure.” (Id.)  At a Madison’s drawing room people could move beyond partisan politics if they chose.
___________________________________
From: “A Perfect Union, Dolley Madison and the Creation of the American Nation”
By Catherine Allgor (Henry Holt & Company, 2006)
Posted by J. David Gowdy at 9:16 PM