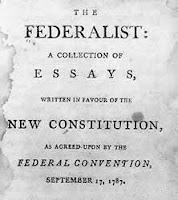 The Federalist Papers were written following the Constitutional Convention by Alexander Hamilton, James Madison and John Jay, as eighty-five essays addressed “To the people of the State of New York” and published in the New York newspapers between October 27, 1787 and April 4, 1788, under the pen name of "Publius" (a collective pseudonym for Hamilton, Madison and Jay), in support of the new Constitution, arguing for its superiority over the Articles of Confederation. The Federalist was also intended to influence Americans in all thirteen states to approve the new Constitution. To this end, the authors were willing to set aside their political differences in pursuit of the common goal of ratification.

Concerning the Federalist Papers, George Washington said, “[they] have thrown new light upon the science of government; they have given the rights of man a full and fair discussion, and explained them in so clear and forcible a manner as cannot fail to make a lasting impression.”1 And, Thomas Jefferson stated that they constitute “the best commentary on the principles of government which ever was written.”2

The Federalist is, by far, the most authoritative text and commentary for interpreting the Constitution and provides significant insights into the intent of the framers. The Papers essentially detail the “how” and “why” behind each article and provision of the Constitution -- providing for us a thorough description and analysis of the structure and meaning of the Constitution. They address the political themes of: (i) federalism, (ii) checks and balances, (iii) the separation of powers, (iv) pluralism, and (v) representation. Significantly, however, the Federalist reveals that the key to our American system of government (a Republic) is channeling and “checking” human nature in respect to ambition and power among leaders, and encouraging civic virtue among the people, in whom the power resides. Clinton Rossiter, a noted historian and constitutional scholar summarized the message of the Federalist:

"[T]he message of The Federalist reads:
no happiness without liberty,
no liberty without self government,
no self government without constutionalism,
no constitutionalism without morality – and
none of these great goods without stability and order."3

Rossiter’s conclusion is that the Federalist is "the most important work of political science ever written in the United States." Hence, it could be stated that no other work is of greater value to students, teachers, and citizens in our journey to learn and appreciate the applied genius that is the Constitution of the United States of America.