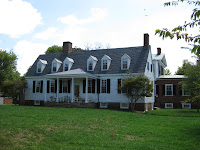 Castle Hill is an historic, 600-acre plantation located at the foot of the Southwest Mountains in Albemarle County, Virginia, near Monticello and the city of Charlottesville, recognized by the Virginia Landmarks Register and the National Register of Historic Places. Castle Hill was the beloved home of Dr. Thomas Walker (1715-1794) (explorer, the physician of Peter Jefferson, and later guardian and close friend of Thomas Jefferson), and his wife, Mildred Thornton Meriwether (widow of Nicholas Meriwether III). Through his marriage to Mildred in 1741, Walker acquired the land comprising approximately 15,000 acres which would become the site for Castle Hill. The original clapboard, colonial residence was built by Walker in 1764. In its great square hall, the youthful, music-loving Jefferson once played the violin, while the still younger Madison danced. It was here in 1781, Walker's wife delayed the British Colonel Banastre Tarleton to give the patriot Jack Jouett time to warn Governor Thomas Jefferson and the Virginia legislators of Tarleton's plan to capture them.

Walker’s granddaughter, Judith Page Walker Rives was born on March 24, 1802. She inherited Castle Hill and married William Cabell Rives on March 24, 1819 -- her 17th birthday. They added the brick, federal addition to the home in 1824. Her husband served in the U.S. House of Representatives from 1823 to 1829. From 1829 to 1832 William was the U.S. Minister to France, where he and Judith resided, and again from 1849-1853. He also served parts of three terms as a U.S. Senator. Judith wrote two novels. The first was “Tales and Souvenirs of a Residence in Europe” (1842) concerning their travels to France and abroad. The second was “Home and the World” (1857) where she gives a vivid picture of antebellum Castle Hill, and the life there through her descriptions of the fictional “Avenmore.” Judith Walker Rives died on January 18, 1882, and William Rives died on April 25, 1868. They are buried at Castle Hill.

Just after the American Revolution, a traveling author visited Castle Hill and wrote an account of his interview with Dr. Thomas Walker:

"One day, in a chat, while each was delivering his sentiments of what would be the state of America a century hence, the old man [Walker], with great fire and spirit, declared his opinion that, 'The Americans would then reverence the resolution of their forefathers, and would eagerly impress an adequate idea of the sacred value of freedom in the minds of their children, that if, in any future ages they should be again called forth to revenge public injuries, to secure that freedom, they should adopt the same measures that secured it to their brave ancestors.'"
Thomas Anbury (Travels Through the Interior Parts of America, 1776-1781)