Martin Luther King, Jr., “I Have a Dream,” and American Founding Principles 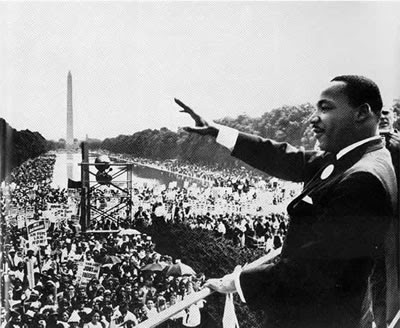 Fifty years ago, on August 28, 1963, Martin Luther King, Jr. delivered his “I Have a Dream” speech to a crowd of some 250,000 black and white Americans, many clergy, and other supporters of civil rights. Every school child has heard of this epic speech, but usually swept away by the soaring oratory and pathos of the speech rather than understanding its principles. King’s speech is profoundly important in its understanding of American founding principles of liberty, natural rights, and self-government.

Five score years ago. The phrasing of course evokes the other great document of 1863, Lincoln’s “Gettysburg Address,” which begins, “Four score and seven years ago our fathers brought forth on this continent, a new nation, conceived in Liberty, and dedicated to the proposition that all men are created equal.” So, King appeals to both of those great documents of liberty, which Lincoln applied to all human beings.

With those four short words – “Five score years ago” – King brilliantly appeals not only to the Gettysburg Address but especially the Declaration of Independence which was adopted four score and seven years before the Gettysburg Address. Both documents pronounce that all men have liberty and equality as they were created by God endowed with inalienable natural rights. “We hold these truths to be self-evident, that all men are created equal, that they are endowed by their Creator with certain unalienable Rights, that among these are Life, Liberty and the pursuit of Happiness.”

Next, King offers high praise for the founding fathers. He says that the “architects of our republic” wrote the “magnificent words of the Constitution and the Declaration of Independence.” This is highly significant in light of the current popular belief disseminated in schools and colleges that Thomas Jefferson and the other founders were rich, white, Protestant, property-owning, misogynistic, males who did not include blacks, women, the poor, and other groups in their idea that “all men are created equal.” But, in King’s view, Jefferson expressed a belief in universal rights embedded in the very nature of human beings by God. He does not call Jefferson a racist and a hypocrite for then King would simply tell the demonstrators that America is based upon lie and urge them to go home.

King takes America to task for the ensuing one hundred years of racism since 1863 as ample proof that black Americans were not actually enjoying their God-given rights. Indeed, he subtly changes the wording of the equality principle in the Declaration of Independence and the Gettysburg Address. For Thomas Jefferson, the idea that all men are born equal was a “self-evident truth” and a principle that was axiomatic and did not need proof. In the Gettysburg Address, Lincoln, even though he agreed with Jefferson that it was a true principle, altered equality to a “proposition,” a proposal that needed to be proven because it was being challenged by the Confederates who denied that blacks were meant to be included in the Declaration.

For his part, King labels the equality principle a “promissory note to which every American was to fall heir. This note was a promise that all men, yes, black men as well as white men, would be guaranteed to the ‘Unalienable Rights of Life, Liberty, and the pursuit of Happiness.” Again, King argues that Jefferson meant all humans, but he used the term “promissory note” because black Americans were not enjoying the rights they had by nature. King, like Lincoln, believed that equality was a true principle, but racism caused it to be an unfulfilled promise. “It is obvious today that America has defaulted on this promissory note insofar as her citizens of color are concerned. Instead of honoring this sacred obligation, America has given the Negro a bad check, a check which has come back marked ‘insufficient funds.’” Still, King did not give up on America and shared the faith of Jefferson and Lincoln in American principles. “But we refuse to believe that the bank of justice is bankrupt. We refuse to believe that there are insufficient funds in the great vaults of opportunity of this nation. And so we have come to cash this check, a check that will give us upon demand the riches of freedom and the security of justice.”

King initiates his parallel construction of repeating “I Have a Dream” by indicating that his dream is “a dream deeply rooted in the American dream.” In yet another reference to the Declaration of Independence, he had a dream that, “one day this nation will rise up and live out the true meaning of its creed. ‘We hold these truths to be self-evident that all men are created equal.’” The same truths were evident, King says, in the patriotic songs celebrating the founding of America that every schoolchild knew: “My country ’tis of thee, sweet land of liberty, of thee I sing. Land where my fathers died, land of the Pilgrim’s pride, From every mountainside, let freedom ring!”

The master orator builds up to a crescendo, finishing his speech with an appeal to universal freedom of all humans by saying, “And when this happens, when we allow freedom to ring, when we let it ring from every village and every hamlet, from every state and every city, we will be able to speed up that day when all of God’s children, black men and white men, Jews and Gentiles, Protestants and Catholics, will be able to join hands and sing in the words of the old spiritual: “Free at last! Free at last! Thank God Almighty, we are free at last.” In other words, black Americans had finally won the right to enjoy their inalienable, God-given rights as a universal principle declared nine score and seven years before.

King’s “I Have a Dream” speech is richly steeped in the tradition of natural rights principles of the American republic. He reached deep into the founding of America and its greatest documents of liberty to craft his own historic appeal to the rights of mankind. That is why we recognize Martin Luther King’s “I Have a Dream” speech as one of the greatest American speeches on its fiftieth anniversary.