Abraham Lincoln and the Declaration Of Independence 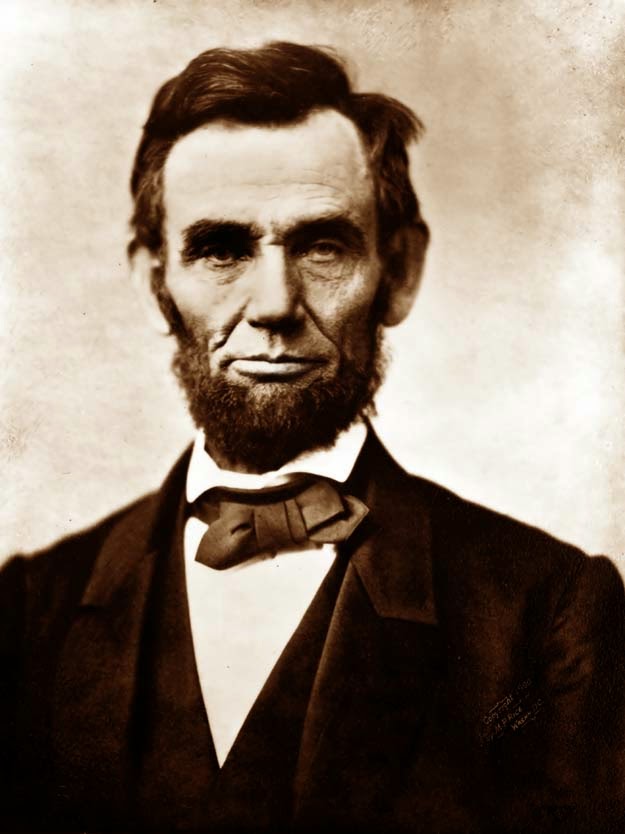 Black abolitionist Frederick Douglass said of President Lincoln: "Even those who only knew him through his public utterances obtained a tolerably clear idea of his character and his personality. The image of the man went out with his words, and those who read them knew him."  (Oration in Memory of Abraham Lincoln, April 14, 1876). James M. McPherson, a noted Civil War historian wrote, “The 'first cause,' the central vision that guided Lincoln … was preservation of the United States and its constitutional government … It was rooted in the Declaration of Independence and the ideals of liberty and equal opportunity that the Declaration had implanted as a revolutionary new idea on which the United States was founded.” (Abraham Lincoln and the Second American Revolution (Oxford University Press, New York, 1991), p. 115-116). Simply stated, Abraham Lincoln’s “polar star” and guiding principles were those found embodied in the Declaration of Independence. As he said in 1861, “I have never had a feeling politically that did not spring from the sentiments embodied in the Declaration of Independence.”  He spoke of the Declaration and its principles frequently throughout his political career. Not only did he speak of them, but he believed in them and relied upon them in his decisions. Following are a few references from Lincoln’s speeches and debates:


"Let us readopt the Declaration of Independence, and with it the practices and policy which harmonize with it. Let north and south -- let all Americans -- let all lovers of liberty everywhere -- join in the great and good work. If we do this, we shall not only have saved the Union; but we shall have so saved it, as to make, and to keep it, forever worthy of the saving. We shall have so saved it, that the succeeding millions of free happy people, the world over, shall rise up, and call us blessed, to the latest generations."
Roy P. Basler, editor, The Collected Works of Abraham Lincoln, Volume II, (Speech at Peoria, October 16, 1854)(cited as “CW”)

"[L]et us revere the Declaration of Independence; let us continue to obey the Constitution and the laws; and let us keep step to the music of the Union.”
CW, Volume II, (Speech at Bloomington, May 29, 1856)

“We hold these truths to be self-evident: that all men are created equal…That is the electric cord in that Declaration that links the hearts of patriotic and liberty-loving men together, that will link those patriotic hearts as long as the love of freedom exists in the minds of men throughout the world.”
CW, Volume II, p. 500 (Speech at Chicago, July 11, 1858)

"'We hold these truths to be self evident: that all men are created equal; that they are endowed by their Creator with certain unalienable rights; that among these are life, liberty and the pursuit of happiness.' This was [the Founders'] majestic interpretation of the economy of the Universe. This was their lofty, and wise, and noble understanding of the justice of the Creator to His creatures...look up again to the Declaration of Independence and take courage to renew the battle which [your] fathers began — so that truth, and justice, and mercy, and all the humane and Christian virtues might not be extinguished from the land..."
CW, Volume II, p. 544-546 (August 17, 1858)

“Now, my countrymen, if you have been taught doctrines conflicting with the great landmarks of the Declaration of Independence; if you have listened to suggestions which would take away from its grandeur, and mutilate the fair symmetry of its proportions; if you have been inclined to believe that all men are not created equal in those inalienable rights enumerated by our chart of liberty, let me entreat you to come back. Return to the fountain whose waters spring close by the blood of the Revolution.”
Ibid.

“I think the authors of that notable instrument [the Declaration of Independence] intended to include all men, but they did not mean to declare all men equal in all respects. They did not mean to say all men were equal in color, size, intellect, moral development or social capacity. They defined with tolerable distinctness in what they did consider all men created equal — equal in certain inalienable rights, among which are life, liberty and the pursuit of happiness. This they said, and this they meant. They did not mean to assert the obvious untruth, that all were then actually enjoying that equality, nor yet, that they were about to confer it immediately upon them. In fact they had no power to confer such a boon. They meant simply to declare the right so that the enforcement of it might follow as fast as circumstances should permit.”
CW, Volume III, p. 283-325 (Debate at Alton, October 15, 1858)

“They [the Founders who issued the Declaration] meant to set up a standard maxim for free society which should be familiar to all,—constantly looked to, constantly labored for, and even, though never perfectly attained, constantly approximated, and thereby constantly spreading and deepening its influence, and augmenting the happiness and value of life to all people, of all colors, everywhere.”
Ibid.

“All honor to Jefferson — to the man who, in the concrete pressure of a struggle for national independence by a single people, had the coolness, forecast, and capacity to introduce into a merely revolutionary document, an abstract truth, applicable to all men and all times, and so to embalm it there, that to-day, and in all coming days, it shall be a rebuke and a stumbling-block to the very harbingers of re-appearing tyranny and oppression.”
CW, Volume III, p. 376 (Letter to Henry L. Pierce, April 6, 1859)

“I have never had a feeling politically that did not spring from the sentiments embodied in the Declaration of Independence.”
CW, Volume IV, p. 240-241 (Speech at Philadelphia, February 22, 1861)

“I have often inquired of myself, what great principle or idea it was that kept this [nation] so long together. It was not the mere matter of the separation of the colonies from the mother land; but something in that Declaration giving liberty, not alone to the people of this country, but hope to the world for all future time.  It was that which gave promise that in due time the weights should be lifted from the shoulders of all men, and that all should have an equal chance. This is the sentiment embodied in that Declaration of Independence.”
Ibid.

“[July 4, 1776] was the birthday of the United States of America. Since then the Fourth of July has had several peculiar recognitions. The two most distinguished men in the framing and support of the Declaration were Thomas Jefferson and John Adams — the one having penned it and the other sustained it the most forcibly in debate — the only two of the fifty-five who sustained it being elected President of the United States. Precisely fifty years after they put their hands to the paper it pleased Almighty God to take both from the stage of action. This was indeed an extraordinary and remarkable event in our history.”
CW, Volume VI, p. 319-320 (Response to a Serenade, July 7, 1863)

Concerning the relationship of the Declaration of Independence to the Constitution, Abraham Lincoln wrote the following meditation on Proverbs 25:11 (“A word fitly spoken is like apples of gold in pictures of silver.”): ... “[The prosperity of the United States] is not the result of accident. It has a philosophic cause. Without the Constitution and the Union, we could not have attained the result; but even these are not the primary cause of our great prosperity. There is something back of these, entwining itself more closely about the human heart. That something, is the principle of "Liberty to all" -- the principle that clears the path for all -- gives hope to all -- and, by consequence, enterprise and industry to all. The expression of that principle, in our Declaration of Independence, was most happy, and fortunate. Without this, as well as with it, we could have declared our independence of Great Britain; but without it, we could not, I think, have secured our free government and consequent prosperity. The assertion of that principle, at that time, was the word "fitly spoken" which has proven an "apple of gold" to us. The Union, and the Constitution, are the picture of silver, subsequently framed around it. The picture was made, not to conceal, or destroy the apple; but to adorn and preserve it. The picture was made for the apple -- not the apple for the picture.  So let us act, that neither picture, or apple shall ever be blurred, bruised or broken … That we may so act, we must study, and understand the points of danger.”
CW, Volume 4, p. 168 (italics in original).


“Four score and seven years ago our fathers brought forth, on this continent, a new nation, conceived in Liberty, and dedicated to the proposition that all men are created equal….”
Gettysburg Address (November 19, 1863)